Customization will bring relief to the price pressure in the UV-A LED market and investments in UV-C LED research will bring breakthroughs UV-A LEDs are primarily used for curing. Presently, curing also represents 52% of the UV-A market in terms of applications. Wu noted that UV-A LED manufacturers will evade the challenge of price competition by offering highly customizable solutions in the future. This means working closely with curing machine vendors in every aspect of product development, such as the LED wavelength, the design of the UV LED module, the composition of the UV adhesive and the design of the cooling system. ...More 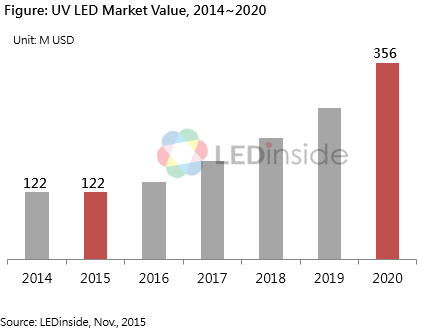 LEDinside Estimates Automotive LED Market Value to Reach US $2.29B by 2020

High/low beam LEDs in particular will see the highest growth in market value, with CAGR reaching 11% during the 2015~2020 period.
Based on LEDinside’s estimates, the total LED volume used in the exterior automotive application worldwide has reached 2.79 billion pieces this year and will grow to 3.67 billion pieces in 2020. From 2015 through 2020, the LED volume used in headlights and position lights will grow by a CAGR of over 15%. During the same forecast period, high/low beam LEDs will have the highest CAGR, reaching 23%. ...More

LEDinside estimates that the value of the global high-brightness LED market will increase by just 2% year on year to US$14.52 billion in 2015 and by another mere 3% year on year to US$14.95 billion in 2016. Even though lighting demand has spurred LED usage volume growth, the ongoing increase in LED’s luminous efficacy has the opposite effect of reducing usage volume. Additionally, LEDs are still under an immense downward price pressure. Based on these observations, LEDinside projects that in the next five years the LED industry’s compound annual growth rate (CAGR) is unlikely to reach more than 10% as before. ...More

LED manufacturers had an especially tough year in 2015. Despite rising LED lighting market demands, and large scale replacements of traditional luminaires, the oversupply situation in the market has caused average sales price (ASP) of LEDs to plunge 30% to 40%. Growing number of manufacturers have incurred heavy losses and exiting the market. With 2016 just around the corner, LEDinside Research Director Roger Chu has listed ten major trends in the market including future LED industry consolidations and technology trends. ...More

The global Ultraviolet (UV) market value in 2014 is estimated to reach US $815 million, in which the UV LED market has about a 15% market share or equivalent to $122 million market value, according to the latest report “2015 LED Demand and Supply Market Outlook” published by LEDinside, a research division of TrendForce. ...More